For some, Jobbik is all that’s left

According to the latest surveys, Jobbik has gained a few percent in the polls. Like the other two parliamentary opposition parties, however, it is still incapable of attracting a sizeable portion of those disappointed in Fidesz. 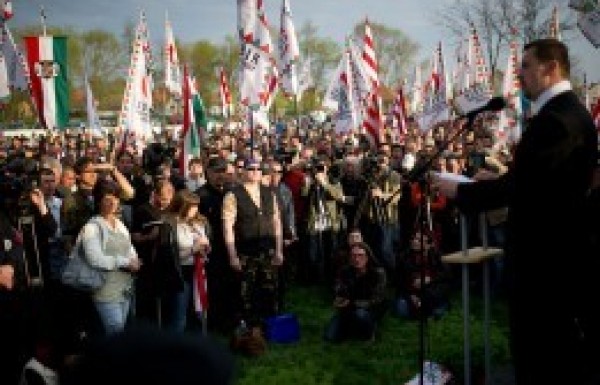 According to the latest surveys, Jobbik has gained a few percent in the polls. Like the other two parliamentary opposition parties, however, it is still incapable of attracting a sizeable portion of those disappointed in Fidesz. The Roma issue remains relevant but is not a hot topic for the time being. Since Jobbik has little else to say apart from blaming the establishment and tracing back all social ills to one minority or the other, it doesn’t appear to be ready to vie seriously for the large pool of undecided voters. Still, lucky circumstances and a bit of work might turn Jobbik into a more serious threat than it is now. Both, the Roma issue and especially the anti-establishment sentiment could gain traction, and with so many voters rejecting MSZP out of hand and still not knowing much about LMP, Jobbik might be the only alternative for some.

Though neither of the opposition parties has been successful at establishing itself as a clear alternative to the Fidesz-government, Jobbik in particular has appeared rather lacklustre since it went from enfant terrible to sizeable parliamentary party. Especially as a movement that thrived on constant provocation and adeptly challenging the influence of the waning left-liberal elite, it seems positively pallid in the face of a right-wing government that – as Jobbik on occasion grudgingly concedes – often hits all the right notes with Jobbik’s voters.

Though recent weeks have shown a slight increase in Jobbik’s support, at this stage this is far from a surge. Moreover, all three opposition parties benefit from the fact that Fidesz’ base is declining: even if none of these voters opts for a new allegiance, the distribution of certain voters has to tilt slightly more towards those parties whose supporters are not defecting to the undecideds. But the fact remains that in light of several hundred thousand Fidesz supporters going AWOL, the opposition – including Jobbik – remains stunningly ineffectual on every level.

Policy Solutions' analysis on the state of the radical right Jobbik party can be downloaded from here.